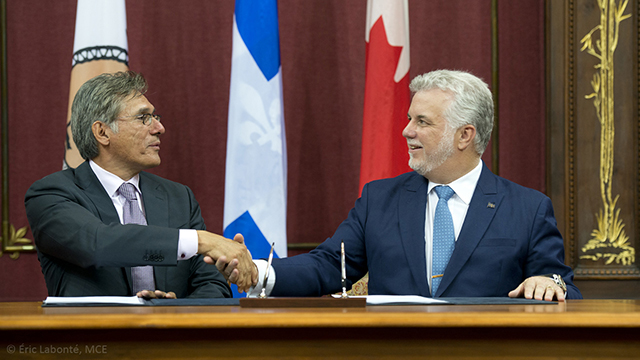 The Québec government signs a new agreement with the Cree

Québec City, July 13, 2015 – “We are taking yet another significant step today in the Nation-to-Nation relations between Québec and the Cree.” It is in these terms that Québec Premier Philippe Couillard welcomed Grand Chief of the Grand Council of the Crees (Eeyou Istchee) Matthew Coon Come at the ceremony at which a new partnership and collaboration agreement was signed. For this occasion, minister of Forests, Wildlife and Parks Laurent Lessard, Minister of Sustainable Development, the Environment and the Fight Against Climate Change David Heurtel, Minister responsible for Native Affairs Geoffrey Kelley, and Minister responsible for Canadian Intergovernmental Affairs and the Canadian Francophonie Jean-Marc Fournier accompanied the Premier.

“The Québec government is firmly determined to maintain harmonious, respectful relations with First Nations and Inuit. Based on this agreement, we are enhancing our relationship with the Cree. Moreover, I welcome Grand Chief Matthew Coon Come as a key partner for the development of Northern Québec, the protection of the territory and the collaboration with local and Aboriginal communities,” the Premier noted.

The agreement signed today covers specific objectives such as forestry harmonization in the territories defined by the Baril-Moses document, which also concerns hunting, fishing and trapping activities, in addition to facilitating the harmonization of the adapted Forest regime.

QUÉBEC CITY, July 13, 2015 /CNW/ -The Grand Council of the Crees (EeyouIstchee)/Cree Nation Government is pleased to announce the signature with the Government of Québec today of the Agreement to Resolve the Baril-Moses Forestry Dispute.

This Agreement resolves a dispute and legal proceedings between the Cree Nation and the Government of Québec regarding the application of the “Baril-Moses” forestry standards. It provides for the implementation of these standards in the affected territory until June 30, 2020. For the period after July 1, 2020, Québec and the Cree will work together on possible improvements of these standards.