Legal framework and designation of the Species

Under the federal Species at Risk Act, the Canadian government designated the woodland caribou (Boreal population) a threatened species in 2003.

While the federal Act provides for a national recovery strategy, it leaves it up to provinces wishing to exercise their jurisdiction to develop and implement a recovery plan. Within the framework of this legislation, it is also stipulated that the Act does not adversely affect Aboriginal constitutional rights. A committee (National Aboriginal Council on Species at Risk) was created to advise the Canadian Minister of the Environment on matters related to the Act’s application.

The Québec legislation stipulates that its application is subject to the Act respecting hunting and fishing rights in the James Bay and New Québec territories. There is no mention of precedence being given to other Aboriginal constitutional rights, the Adapted Forestry Regime or the Paix des Braves.

The James Bay and Northern Quebec Agreement institutes, in Chapter 24, the hunting, fishing, trapping regime. This regime is subject to the conservation principle (sect. 24.2.1) that is defined as follow:

“the pursuit of the optimum natural productivity of all living resources and the protection of the ecological systems of the Territory so as to protect endangered species and to ensure primarily the continuance of the traditional pursuits of Native people, and secondarily the satisfaction of the needs of non-Native people for sport hunting and fishing.” (sect. 24.1.5)

All of the experts consulted agree that the management approach of the Paix des Braves Adapted Forestry Regime conflicts with woodland caribou protection. The caribou, whose habitat comprises large expanses of mature spruce forest, is especially vulnerable to predators and human disturbance.

Through its mosaic-cutting approach, the adapted forestry regime favours moose habitat and increases the presence of its predators (wolf and bear), which also attack caribou, increases the forest road network and the resulting worker and vacationer travel and, finally, fragments the forest with the goal of creating a “standardized” forest containing all age classes.

In addition to logging, the territory is also subject to a moose management plan. Hunting zones 17 and 22 transect primarily the Paix des braves territory. The plan’s goal for zone 17 is to increase the moose population density so as to:

In zone 22, the goal is to increase the moose population density without harming woodland caribou, which require special protection. 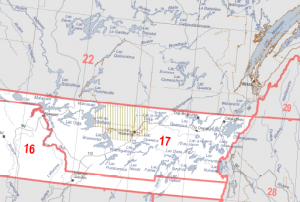 The management strategy approach was based on the succession of protected expanses and replacement expanses in time and space. The strategy did not apply to the Paix des Braves Territory, because the Adapted Forestry Regime provides its own management approaches that should continue to be fully respected. However, it was recommended that discussions be held to develop and implement alternative approaches to those stipulated in the ANRQC.

In December 2010, the parties to the Agreement established a special committee (Woodland Recovery Task Force) mandated to implement a precautionary approach and a plan for the recovery of woodland  caribou in the Paix des Braves Territory. A technical committee was subsequently set up. The Board, through its Secretariat, collaborated to the work of these committees.

In october 2011, the parties to the Agreement mandated an expert committee to provide to the Special Cree-Quebec Woodland Caribou Task Force, expertise, analysis and advice towards the recovery and persistence of the Woodland Caribou population in Eeyou Istchee

In February 2012, at the Board’s invitation, the expert committee presented its preliminary report on the status of woodland caribou on Agreement Territory to various organizations working in the territory of James Bay.

In September 2012, the expert group tabled its final report to the parties.

From their analyzes of nine years of demographic data and satellite telemetry acquired by the Ministère des Ressources naturelles et de la Faune on the three herds in the Territory (Assinica, Nottaway and Témiscamie), experts estimate that:

Further to the expert group’s tabling of the report, the Board advised the parties on the follow-up that should be made to its conclusions.

The main recommendations were:

While waiting for the woodland caribou recovery measures to be proposed in the above-mentioned pending global action plan, the Board recommended:

For its part, in the context of its responsibilities, the Board continued to review forest management plans to ensure that the woodland caribou issue is incorporated into them.

Read the Board advice

In October 2013, Ministère des Ressources naturelles (MRN)’s Nord-du-Québec general direction announced the immediate implementation of a new precautionary principle that had been developed with timber supply garantee holders to meet, among others, certification standards. MRN’s approach, based on the identification of strategic forest tracts for woodland caribou recovery, covers a total of 8,000 km2.

Harvesting and road construction or improvement activities are not allowed in the areas covered by the precautionary approach. These areas were also taken into acount in the Chief Forester’s allowable cut calculations.

Description of the situation

Since the establishment of the special committee on woodland caribou (Taskforce) various actions and initiatives were conducted both by the committes in place and by each of the parties.

For various reasons, the Taskforce did not meet since June 2013. The parties have progressed on their own.

In January 2015, the new Chairman of the Board presented his understanding of the file to Board members. Perceiving a stagnation of the file, he expressed his strong desire that the Board play an active role and make sure that a woodland caribou recovery plan in Agreement Territory is implemented in the short term.

However, the announcement of a potential revival of the Taskforce in spring 2015 prompted the Chairman and the Board to give it a last chance provided it meet and propose quickly a concrete and acceptable action plan. In parallel, the Board Secretariat was mandated to develop a woodland caribou provisional recovery action plan in Agreement Territory.

In June 2015, since the expected resumption of the parties’ discussions still had not taken place, the Board decided to appeal to the parties and reiterate the importance of agreeing on a global recovery plan that is subject to a consensus between the parties. While acknowledging that some new elements should be taken into consideration, the Board suggested to the parties to discuss more in depth and agree on the elements presented in the provisional plan. Members also agreed on the importance of reactivating without delay the Technical Committee that had been established to consider and develop the various implementation actions of the draft provisional plan.

The Board also assured the parties of its will to contribute constructively to the development of a woodland caribou recovery strategy in Agreement Territory while promoting availability of such a strategy when developing the next generation of tactical plans for the Territory.