3.12: Protection of forests adjacent to watercourses and lakes

Certain Elements of the Problem Raised by the Trappers

The adaptations linked to riparian buffers agreed to under the Adapted Forestry Regime have been applied in the territory since the Agreement came into effect in 2002. Since implementation of the Adapted Forestry Regime began, trappers have repeatedly expressed their dissatisfaction at the way these areas are managed, given the traditional activities they practice here and the fact that these sectors are used by wildlife.

The Crees have traditional, historical and cultural ties with riparian environments. These ties and values, which are closely connected to river systems, often constitute a source of conflict between Cree users of the territory and forest-sector stakeholders. Since implementation of the Adapted Forestry Regime began, trappers have repeatedly requested harmonization measures for sylvicultural treatment areas located near watercourses and expressed their dissatisfaction at the way these areas are managed, given the traditional activities they practice here and the fact that these sectors are used by wildlife. Although the provisions of the Agreement are respected, they do not consider them adequate to take their use of the territory into account. The JWG members and the reports they produce raise this problem time and again. When draft guidelines were developed to protect and develop wildlife habitats (2005) and in the first assessment of the AFR’s implementation in 2002-2008 (2009), the tallymen’s concern regarding activities in these areas of special interest was noted. 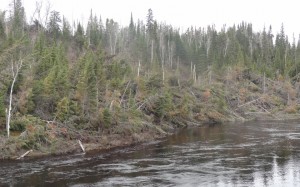 During the tour conducted for the 2008-2013 assessment, the Secretariat specifically questioned the tallymen about the management of riparian areas. The overwhelming majority of tallymen and users of the territory interviewed commented primarily that the windfalls observed in the riparian buffers restrict their activities in these sectors and inhibit wildlife movement.

An interesting Master’s thesis, involving 25 Waswanipi Cree users and their needs/expectations regarding protection of watercourses and associated sites in Eeyou Istchee, details the problem observed (J. Hébert, 2007). The findings presented indicate that “the measures currently used by forest managers to protect riparian and aquatic environments do not incorporate the needs and expectations of the main Cree users concerned”. It notes that the tallymen’s recommendations are aimed at continuing their traditional activities both from the viewpoint of protection of the landscape’s visual quality and the wildlife habitats used. They ask for better riparian strip protection in order to be able to carry out their activities in a high-quality environment.

During the Fall of 2013, the Board decided to look more thoroughly at this particular issue. Various considerations have been taken into account in determining the main axes of intervention by which the Board should address the issue, namely, the discussions between the parties on the harmonization of the RFA and the Sustainable forest management Act (SFDA), new provisions of the future Regulation on Sustainable Forest Management (RSFM), which is expected to come into force in 2016, and the major exercise on mapping the Cree use of the EEyou Istchee territory (CLUM project).

A project designed to better define the nature and scope of the riparian buffer problem in the territory of the AFR was conducted. To this end, various activities have been carried out.

First, a portrait of the state of knowledge related to the issue was produced. Several university professors who, by their specialization, each had a different perspective on riparian buffers, were questioned on the adequacy of Agreement’s provisions for riparian areas according to their own expertise. To a certain extent, they all referred to the fact that, even if not optimal, the protection measures were sufficient to maintain the ecological function of riparian areas in terms of wildlife habitat, connectivity, and barrier for sedimentation, especially when applied in the Paix des Braves mosaic matrix. They suggested the problem was more social (trappers’ dissatisfaction) rather than ecological. Some alternate management approaches for riparian areas were suggested.

As part of the problem characterization phase, Québec JWG members were mandated during the summer of 2014 to conduct a compilation of harmonization measures requested by tallymen in the context of the 2008-2013 forest management plans.

The portrait shows different types of requests such as: widening buffers; avoid partial cutting in buffers; locate residual blocks next to important riparian areas. Requests were made in the entire trapline, not only in 25% areas. Most requests seem to have been accepted by planners when in link with harvesting plans/sectors. General request such as widening buffers for all lakes and all rivers on the trapline seem to have been rejected.

A focus group with JWG members from both parties to discuss and understand the portrait is supposed to be the next step for this task. This did not happen yet.

3- Mapping assessment of the windthrow problem

During the summer of 2014, a Cree Nation Governement GIS technician was asked to perform a mapping assessment of the windthrow situation in the riparian buffers. This was requested because many tallymen complained that the trees left in the buffers are falling. For them, this creates obstruction for navigation or for animals using them as shelter or as a corridor.

The methodology was proposed by Jean-Claude Ruel (Université Laval). The aerial photos were made available through collaboration with MFFP. The study consisted in reviewing all riparian buffers generated during the cutting year 2004, with aerial pictures taken more than 5 years after the cut (most were 2013), and to characterize the extent of the windthrow situation.

What are the Board’s next steps?

The activities for this project were halted when a new Chairman and new Board members for Québec were designated in the Fall of 2014. It was also necessary to check if the project was still a priority for the Board considering the preliminary results obtained in the problem characterization phase and the progress in the negotiations between the parties.

Board members agreed to continue in this file to better understand the issue from the tallymen’s point of view. They decided to to organize a field visit, in July 2015 in, to be able to discuss the issue directly with the trappers/tallymen.

Following these discussions with Cree land users, Board members will decide on the next steps to be taken.