Status Report on the Implementation of Forestry-Related Provisions

The Cree-Québec Forestry Board was created to monitor, report on and assess the implementation of Chapter 3 of the Agreement Concerning a New Relationship Between the Gouvernement du Québec and the Crees of Québec.

In keeping with its mandate, the Board has, so far, published three reports on the implementation of the forestry-related provisions:

To ensure a certain degree of continuity with the two previous five-year status reports, the approach for carrying out the 2013-2018 status report is again based on two levels of analysis: (1) factual analysis of the implementation of all the Adapted Forestry Regime provisions (detailed analysis, section-by-section) and (2) analysis of the stakeholder interviews (tallymen, Joint Working Group (JWG) members and coordinators, Board members, technical advisors and forestry industry representatives) conducted to get a sample of their viewpoints on the achievement of Chapter 3’s objectives. The sixth amendment to the Agreement Concerning a New Relationship Between le Gouvernement du Québec and the Crees of Québec, formalized in 2017, provides for a fourth objective, which was added to the 2002 Agreement’s three objectives. The objectives of the AFR thus aim to allow:

The 2013-2018 status report on implementation of the Paix des Braves’ AFR is positive overall, challenges and issues remain and necessitate maintaining an ongoing

approach aimed at continuous improvement. In terms of general recommendations, the Board proposes continuing according to the three main focuses identified in the 2008-2013 status report:

Several action priorities aimed at responding to the elements identified in the 2013-2018 status report are also proposed. 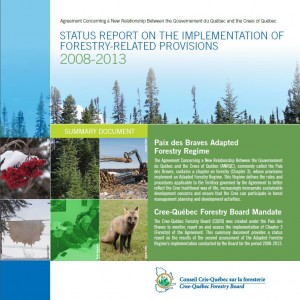 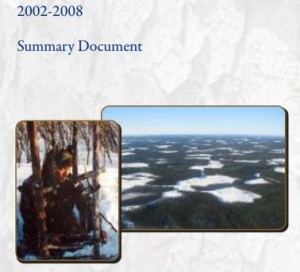 The Board adopted a monitoring framework to assess the implementation of Chapter 3 of the Agreement on an ongoing basis. This dynamic, interactive tool addresses the issues and needs for AFR evolution when they arise. Therefore, courses of action can be proposed without waiting for the end of the five-year period and production of the next status report.